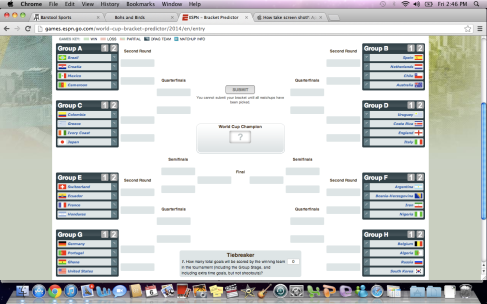 So Brazil decided to make a spectacle of the World Cup selections and broadcast it live on ESPN2. It included legendary soccer players like Zinedine Zidane and smoke show host Fernanda Lima show it all off.

Looking at the Bracket, The US of A is going to have a tough time getting through Group G. Groups B, D, and G are all very tough while the rest should be pretty straight forward. Key match up for the USA is when they take on CR7 and Portugal. I expect Germany to sweep through this group, and Portugal, Ghana, and the US to battle it out for the 2nd spot. Ghana is no laughing stock either, playing pretty well in the past 2 cups. Portugal is getting older and Ronaldo is pretty much their only effective offensive player. US needs to play slow and counter the Portugal attack. I think there is a possibility for the US to advance and play France or Switzerland, both very winnable games.

Group A: Brazil should steam role and I think Croatia could come out of that group. Mexico will  battle for the 2nd spot though. Futbol is godly over there.

Group C: One of the weaker groups, Colombia should easily make it through with striker extraordinaire Radamel Falcao leading the way. Ivory Coast and Japan should be in line for the second spot. Those Japanese are tough.

Group E: Not a good bracket at all. France and Switzerland through.

Group B: Don’t sleep on the Chileans. Spain should advance, and Holland, but Chile is a solid squad. Might be able to squeak out an upset vs the Dutch.

Group D: This is a brutal group. Solid top to bottom. Italy should make it out. Uruguay would be my pick but England seems poised to make a run. Costa Rica is a solid team. I wouldn’t be surprised to see them go 0-3.

Group F: Argentina B team will roll through this group. I guess Nigeria makes it through. Pretty weak bracket.

Group H: Belgium and Russia are pretty solid. Belgium has some of the best in the Prem league, including a ridiculous 2 deep set of  midfielders and wingers that could start almost anywhere in the world. Problem is they don’t have a reliable striker.  South Korea is not a team to sleep on though. I could see them sneaking in with a solid line up of Prem and Bundesliga players.

US will need to get team chemistry at an all time high to come out of this group. Hopefully we can get Donovan, Altidore, and Dempsy on the same page and make a little run into the 2nd round and then face a France/Switzerland team which we are capable of beating. We’ll likely face Germany next and even after that Brazil, so things are not looking up for the boys. Let’s bring them hell though, US of A style!