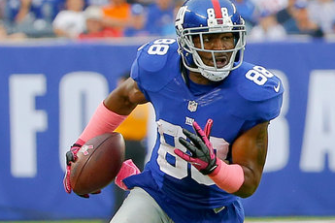 “Last night, Peter King and yours truly discussed whether the trade should happen.  King believes strongly that they should.

And it makes sense.  The Giants are 0-6, they likely won’t pay Nicks what he wants (which could be along the lines of what Mike Wallace got), and they may as well get what they can and move on.

The ability of G.M. Jerry Reese to find plenty of other competent receivers via the draft or otherwise (e.g., Victor Cruz, who wasn’t drafted) suggests that the Giants are better off finding a young replacement next year, trusting Eli Manning to help the player become a good-to-great receiver, and shipping Nicks to a contender.”

With the departure of Boldin in the offseason for (seemingly) nothing in return, you had to wonder if the Ravens were going to be able to replace that presence on the field. We need that guy who can go across the middle, take a hit, and be a solid possession receiver.  The change of scenery and culture would do wonders for Nicks in Baltimore.

Bring him in and watch what he’ll do at M&T on Sundays.