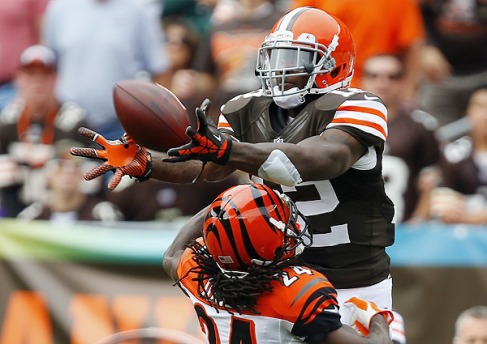 Josh Gordon and Hakeem Nicks are both apparently being shopped. I would assume it would take at least a 2nd rounder to get Gordon, and possibly a 1st rounder for Nicks, who is  on his contract year. Is now the time for the Ravens to pull the trigger and make the biggest in season move this year in the NFL?

After the Browns shipped Trent Richardson to the Colts for a 1st rounder, he has yet to produce a quality week. Is is to late for the addition of Gordon or Nicks to make an impact for the Ravens? I think if a deal is not in place by the end of this week then it would be too late. Week 8 is next week, and assuming the player were to come in and learn the playbook and work with Flacco for 2 weeks, they would be ready for week 9. It’s now or never for the Ravens.

The ideal situation for Ravens fans would be to add Josh Gordon for a 2nd rounder to start opposite Torrey Smith. Smith provides the 1 on 1 deep threat that can go up and get the ball while Torrey Smith is the speedster who can run across the middle and pick up yards after the catch, but is also a vertical threat in the slot. I can picture the Ravens running an I formation with Gordon at X and Smith in the slot to one side with Dickson at TE and Rice and Leach in the backfield. With 2 dynamic WRs, opposing defenses will need to keep a safety or 2 back to prevent the long ball. Why do you think teams like Green Bay and Indianpolis are able to rack up rushing yards? Not because of superoir running game but because of the defenses they see. With the struggling o-line, having one more defender out of the box could really help the Ravens improve the run game.

I don’t think Nicks is a move they will make. He will be looking for Mike Wallace(5 Yr. 60 Mil) numbers, which the Ravens cannot afford. Josh Gordon on the other hand makes a little over 1 million a year and is locked in until 2016. The issue with Gordon is his previous off field issues, which may be risky to give up such a high pick on a trade that could not pan out.

While I would like to see Gordon in Ravens black and purple on Sundays, all the pieces don’t seem to be coming together to make this deal happen. NFL teams are made in the preseason, not with mid season deals that tend to throw off team chemistry.