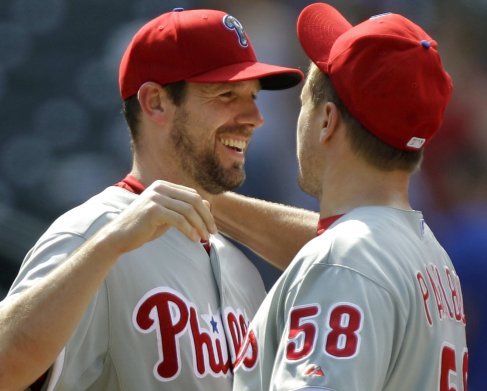 The O’s are in need of a closer and a starting the pitcher. The Phillies are willing to sell some of their top talent in the rotation and pen. The O’s need to take a serious look at some possibile moves. Papelbon, who is 33, is the first target. His 13 million a year contract is not what the Orioles are looking for, but his numbers as a closer are. His past two year in Philly have been pretty good, posting a 2.44 ERA in ’12  and 2.92 in ’13. He recorded 31 and 38 saves, also missing some time with injuries in both years. The Phillies want to move him so a deal could easily be made. We know the Phillies will be looking for pitching, and they are not going to sell him cheap, so expect one of the top O’s pitching prospects to be involved. Gausman, Rodriguez,  Bundy(probably not) are what the Phils are looking for. If the O’s want to spend, they could try and do a package deal and pick up Cole Hamels/Cliff Lee at the same time. Hamles is 29 while Lee is 35, and they are both dominate lefties. The Phillies would rather move Lee, so we’ll start with that. Cliff Lee and Papelbon are going to cost the O’s a lot. Moving JJ Hardy along with a Gausman/Rodriguez/Bundy and another top prospect would probably be the only way the Phillies move both these guys. I just don’t see the O’s moving all three prospects and likely another 1 or 2 like Schoop. The O’s will also take a huge hit on their salary, absorbing 13 mil from Papelbon and and  21.5 from Lee. JJ Hardy’s 7 million a year contract would help a little.

The O’s are set up to win this season. Both New York and Boston are missing key players from the team last year. The Rays should be without David Price. The O’s desperately need pitching, and a deal like this would give them a solid #1 pitcher, which is what they have been searching for, and a shut down closer. Looking at the division, now is the time to move prospect for proven veterans. Instead of Lee, the O’s could go for Hamels but would likely have to move Bundy, Hardy, and possibly Rodriguez.

The O’s have all the pieces to make this trade. There are not many teams with talented prospects like the O’s, and I’m sure Philly called the Orioles immediately when they decided to put this talent on the block. I like Bundy, Gausman, and Rodriguez  as the possible 1,2,3 of the future, but with the way the division looks now, this could be one of the only years the O’s have a chance to make a run for the Series. It’s do or die right now for Buck and the boys. The AL East is at its weakest its been in years(still very strong), and the O’s need to strike. Pull the trigger and bring in some veteran pitching. The Phillies are more than willing to move these players if the right deal is put on the table.

Philies have a strong minor league system and can provide a solid prospect for the O’s.

Phillies could also be looking at Matusz, Tommy Hunter, and O’Day as possible players to land. They will need someone to close for them if they move Papelbon. 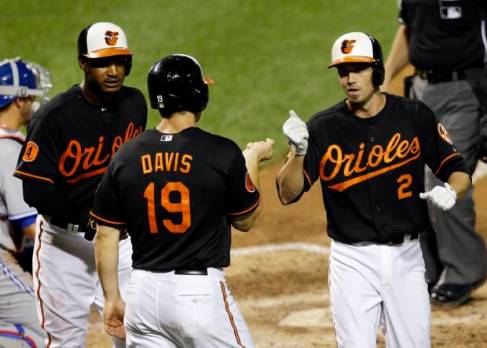 (saw this picture plenty of times this year)

The Orioles continue to win headlines(and not games) in the post season with a few silver slugger awards. The Orioles had the most players from one team this year; Adam Jones(OF), JJ Hardy(SS), and Chris Davis(1B). Hardy(.263 25 HR 76 RBI) and Davis(.286 53 HR 138 RBI) were well deserving of this award. I know Joneys led all AL outfielders with 108 RBI, but I thought there would be someone more deserving. After further looking into it, Trout and Tori Hunter were the only 2 that should have won anything. Adam Jones is a great hitter, but his .318 OBP is pathetic. Jacoby Ellsbury is a great player, but I don’t think he deserved a silve slugger. Same with Alex Rios, he put up great stats, but was on a shitty team. He probably would have posted 100 RBIs on a real team. Hardy’s only competition was Jed Lawrie who had a higher batting average and same the amount of RBIs, but only 15 HR.

The only other teams with multiple players to win silver sluggers were  Detroit, Pittsburg, and St. Louis, all playoff teams. This is a clear evidence that the Os need to improve their pitching staff. They had the best hitter in the AL at 3/9 of their positions and were unable to reach the playoffs. None of the Os pitchers will even come close to an award. I still laugh at the fact that Chris Tillman was an All-Star. An average ERA and high wins thanks to the Os offense got him there.

Os need to keep the bats around and bring in some pitching. Need to challenge the Yanks, Rays, and Sox batters this year. 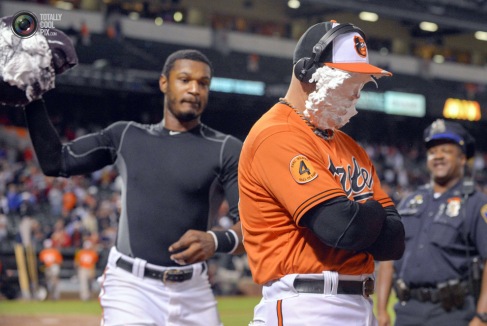 The Orioles put together the perfect example of a “rollercoaster season” this year. After a decent first half, the Orioles became a very inconsistent team, having no balance with their offense and pitching. The early hot bats cooled off towards the end of the season and the poor pitching all season finally cost the team to miss out on the play offs following a tight AL East race.

You can look at stats all you want, but Chris Davis (286. 53HR 138RBI) was the only player to consistently play both offense and defense all year. Adam Jones(.285, 33HR 108RBI),  Manny Machado(.283, 51 2B, 71 RBI), and J.J Hardy (.263, 25 HR 76 RBI) were All-Stars after strong starts to the season, but did not play as well in the second half. Jones and Wieters were notorious all year for late RBIs and HRs with the team down 5+ runs. Machado hit a very cold streak in November and September both offensively and defensively that cost the team. Hardy was never in full rhythm with the offense and seemed a little uncomfortable batting late in the lineup. Corner outfielders Nick Markakis and Nate McLouth were also very inconsistent at the plate, especially late in season.

The biggest issues with the Orioles were their lack of a power hitting DH and inconsistency at second base. The Orioles production from the DH spot was one of the leagues worst. Using a combination of Nolan Reimold, Danny Valencia, Steve Pearce, and Brian Roberts was a disaster for the O’s. After struggling all season,  Michael Morse was brought in from Seattle, clearly something Buck Showalter did not agree with, and got not production out of him.

After Brian Roberts went down with an injury, the Oriole’s used a platoon of Ryan Flaherty and Alexi Casilla. This was a major downgrade from a healthy Roberts, and left the 9 hole one of the weakest in the AL. I do like Flaherty as a back up utility player, as he did show some promise and a little power towards the end of the year, but he needs more time to develop into an everyday starter.

The pitching staff struggled all year and was easily the main reason the O’s missed out on the playoffs.  Starters Chris Tillman (16-7 3.71 ERA), Miguel Gonzalez (11-8 3.78 ERA), Wei-Yin Chen (7-7 4.07 ERA), Scott Feldman (5-6 4.27 ERA), Bud Norris (4-3 4.80 ERA), Jason Hamel (7-8 4.97 ERA) the 8 other pitchers(“Sweaty” Freddy Garcia) to start for the O’s did not have their best stuff this year. While Hamel won 16 games, it is evident that he was not a true #1 pitcher, and that there is no Ace for the Orioles. Adding Feldmen and Norris were good moves that did not pan out. The Orioles need to go shopping in the off-season for a #1 to solidify this staff. There were obvious locker room issues with players like Francisco Rodriguez, Jair Jurrjens, Jake Arrieta, Pedro Strop, Luiz Ayala, ect. that also held back the O’s.

The bullpen, which looked strong to start the season faced problems following Jim Johnson’s melt down. Tommy Hunter and Darren O’Day pitched decent but there was always a sense of worry whenever a new reliever was brought on. K-Rod and T.J McFarland struggled at the end of the season. Brian Matusz and Troy Patton never looked comfortable on the mound despite being matchup pitchers. On a positive note, the pen finished in the middle of the MLB in terms of stats and in my opinion, can only get better after giving Tommy Hunter, Matusz, and O’Day more experience.

Looking at next season, the Orioles need to make some Free Agent additions. Jason Hamel and Scott Feldman are free agents and I suspect they will land else where. Brian Roberts Michael Morse, and Nate McLouth are free agents  I also expect to not sign in Baltimore. The Orioles will need 2B, LF,  DH and SP. Possible SP additions: Matt Garza, AJ Burnett, Josh Johnson, Tim Linceum, Ubaldo Jimiez, Ricky Nolasco, Bartolo Colon, Bronson Arroyo, Ervin Santana, Dan Haren. The question is are the Oriole’s willing to pay 10 Mil for a pitcher? I would hope so, and looking at this list, Ervin Santana could be a perfect fit for the O’s, despite loosing a draft pick.  If the Orioles are looking to make a splash, why not 2 and bring in Nolasco or Garza? At second base, Omar Infante is the #1 guy, but may cost too much. Kelly Johnson,  Juan Uribe, Michael Young, Skip Schumaker, and a few others could be options. I just don’t see Brian Roberts returning. OF/DH will be interesting. Will the Oriole’s spend? Players like Todd Helton, Paul Konerko, Kevin Youkillis, Eric Hinske, Lyle Overbay and James Loney will be available for DH. All have proven power.  Carlos Beltran and Marlon Byrd will be a free agent for both spots but will likely cost too much. Rajai Davis could be a good replacement for McLouth, while players like Corey Hart and Tony Gwynn Jr. could be had for a lesser price than Beltran.

Going forward, I see the Orioles rotation looking something like this : Hammel, Gonzalez, Chen, Norris, and Gausman after the Orioles fail to sign a top SP. I like the young Orioles pitchers in Gausman, Bundy, and Britton, but having Gausman start out in the minors would be the best for the rotation. The lineup will change, with the addition of  LF, 2B, and DH. My guess would be Rajai Davis/LF will lead off, with Markakis, Machado, Davis, Jones, Hardy, DH, Wieters, 2B. the DH will likely be a righty as Buck loves setting his line up L/R/L/R. The bullpen will likely add 1 or 2 guys for depth but not much should change.

If the Orioles want to spend this year, they can add 1 or 2(more likely 1) quality pitchers for 10 Mil a piece, Omar Infante, Rajai Davis, and their choice of a righty DH. While this most likely will not happen, this team could be very dangerous. Regardless of the free agent additions, there are enough pieces on offense to make the Orioles a contender again. A healthy Chen and Gonzalez should produce better from last year, and Tilman should have confidence after a 16 Win season. Machado will be healthy and hopefully back in his top form.

While the AL East will be just as tough next season as it was this season, I see the Orioles playing as a contender for the wild card in September next season. With a strong FA class for their needs, the Orioles could piece themselves together an October baseball team.